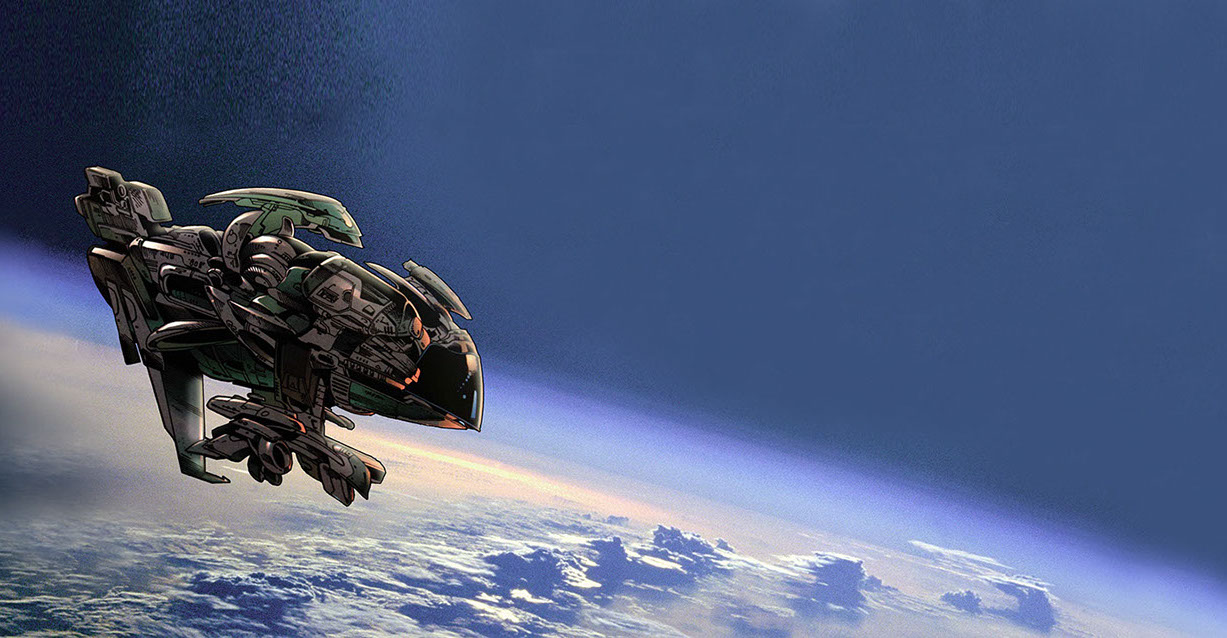 Alien Legion is an entertainment property that first saw the light of day as a comic book series published by Marvel Comics' Epic Comics imprint.

“The Foreign Legion in space” or “The Dirty Dozen meet Aliens”

“Footsloggers and soldiers of fortune, priests, poets, killers and cads—they fight for a future Galarchy, for cash, for a cause, for the thrill of adventure. Culled from the forgotten and unwanted of three galaxies, they are trained to be the most elite, and expendable, of fighting forces. Sometimes peacekeepers, sometimes shock troops, the Legion is sent into the Galarchy’s most desperate internal and external conflicts. Legionnaires live rough and they die hard, tough as tungsten and loyal to the dirty end.”

Parts of the series have been collected in trade paperbacks from Epic Comics, Dark Horse, Titan Books and Checker Book Publishing Group.

The most recent miniseries, "Alien Legion: Uncivil War," was published by Titan Books.

Over the years, Alien Legion has had a number of close calls with Hollywood - for feature films and TV series. We continue to work hard to get the right deal with the right creative vision in place.

In an age of faster-than-light drives and intergalactic travel, three galaxies have formed a Galactic Union, known as the "Galarchy” or the "Union."

Beginning a as a trade organization, the Union evolved over eons into a strong federal system that governs countless incredibly diverse worlds, races and cultures.

Three elected Galarchs, one from each galaxy, rotate positions as heads of the executive, legislative and judicial branches of the Union. Two legislative houses are composed of elected representatives - Stellar Reps and Planetors.

Local leadership on inhabited worlds is by appointment or election. Because of the massiveness of the government network, the Union often runs into problems typical of a giant bureaucracy including conflicts of interest, political corruption, economic inequities and budgetary waste.

Union responsibilities include the policing of spaceways, containment of rebellion, vigilance against hostile outside forces and monitoring treaties with friendly non-Union parties.

Within its astral borders, the Union’s primary goal is the maintenance of a general peace for its inhabitants. The Union fosters a uniform system of values and shared beliefs which it believes will permit all sentient beings to live full and rich lives.

The Union is no utopia, as legionnaires fighting the Union’s dirtiest battles know full well. There are always those who opt not to participate for cultural, ideological, economic and/or criminal reasons.

In the wide variety of physical conditions that are scattered across the galaxies, life forms have evolved in countless bizarre ways. Add purposely bio-engineered species into the mix and a well-traveled sentient will encounter a bewildering variety of life in the Alien Legion universe.

Size, shape, metabolism, intelligence, culture, etc. vary widely. Sentients range in size from the near-microscopic to the size of a moon. The physical conditions that each species requires (food, gravity, atmosphere, light, etc.) vary widely too. Technology and pharmaceuticals have been devised, allowing the majority of Union sentient species to share the same environments.

Sentients with the most extreme needs participate in social, commerce and government activities through remote communication.

When traveling to non native worlds, all "alien" species in the Union - sentient or otherwise - are required to go through an internal and external decontamination regime designed for each species.

With such a variety of life forms, it is not always easy to tell by initial observation whether or not a creature is intelligent/sentient. This can cause confusion, problems and unintended humor in highly-integrated situations - like the ranks of the Legion.

The number of cultures and belief systems within and without the Union is even larger than the number of sentient species.

The process of converting matter to energy then back to its original matter for ease of transmission. An expensive and dangerous process. Rarely used to transport living things since the subject will probably not be 100% complete when re-matterized after transmission.

Accomplished in several ways including the use of hyperspace warps and “mini” synthetic black holes (which are too dangerous and unreliable for use as matter transmitters).

Often used to toss raw ore from a surface mine into low orbit where it is picked up by transports.

A device that can project concentrated light energy in a sphere.

A computer-designed language that sounds like English to us. Spoken throughout the Union though each world has its own native languages. The official language of the Legion, all recruits are required to learn Galingua. Only those physically incapable of speaking the language use auto-translators.

Many star systems have their own “local” military forces. The Union has several military branches that defend the Union as a whole, including the Union Guardians and the Galactic Fleet. Although these military branches are open to all of the Union's sentient races, as a practical reality, the ranks are often comprised of the relatively few races local to a particular region of Union space.

The Alien Legion is the military branch that guards the Union’s most inhospitable outposts. The Legion is also assigned to quell desperate and politically charged rebellions. It is the one military branch where the integration of all Union races is not only actively encouraged, it is policy.

This eclectic mix allows the Union to use the Legion where the government might be open to charges of bigotry if it sent in a fairly homogeneous force to settle a dispute by another race.

Some join the Legion to serve their government or flee oppression. Others seek adventure or fortune. Still others are criminals in hiding, creatives seeking inspiration or proselytizing preachers.

Despite the ideal of camaraderie within the Legion’s integrated melting pot, a legionnaire’s worst enemy is often a fellow legionnaire. Due to the high percentage  of “undesirables” in its ranks, the Legion is considered the Union's most expendable military branch and given the harshest missions.

It takes extraordinary leaders to mold the Legion’s motley ranks into well-trained and disciplined fighting units. Many Legion officers first proved their mettle in other military branches.

Can take the form of a handgun, “rifle” or larger units. The size of the weapon dictates the power of the beam it emits. Powered by energy magazines. "Big HEL" is the largest version carried by troops.

Sizes range from a hand weapon to a large "cannons." The projectiles launched using an electromagnetic rail. Ammo types include HE, scatter shot, incendiary and EMP shell (to disrupt enemy electronics).

Include gargantuan HEL guns (“light cannons”), various guided missiles, Tri Dimensional Lasers as well as microwave and sonic cannons. Some ships have so much firepower that they can split smaller planetary objects into pieces - hence the nickname “Piecemaker” for Nomad’s ship.

Molecule thin wire manufactured in a zero gravity environment under exacting conditions. Easily cuts though virtually any matter. Very rare, expensive and illegal. The ends of the wire are thicker, allowing it to be wielded without slicing into the user. Jugger Grimrod has an unsanctioned molly-wire.

In the Union and surrounding galaxies, fissionable material is very rare. Hundreds of cycles ago, during the Union unification wars and early encounters with the Harkilons, fissionable weapons were used, causing such devastation that the Union swore not to use them again. The most powerful were capable of destroying a whole solar system.

Before he broke into the comics business, Carl Potts generated several story and character ideas that later come together to become Alien Legion. After he joined Marvel's editorial staff, Carl felt he'd developed the Alien Legion concept, characters and universe enough to launch a comics series.

However, editorial duties and freelance commitments prevented Carl from writing or drawing the series. With story ideas and character designs in hand, Carl approached Alan Zelenetz, who enthusiastically agreed to script the series. Then,Frank Cirocco agreed to supply the pencil art. Alan and Frank helped flesh out the property and became co-creators. Terry Austin came on board to ink and the first creative team was set.

The Alien Legion comics have greatly benefited from an evolving crew of talented creators. In particular, writer Chuck Dixon - and his frequent artistic collaborator, Larry Stroman - have added a number of important storylines and characters to the Alien Legion mythos.

In addition to Archie, a number of other Epic editorial staffers helped produce Alien Legion including (among others) Marcus McLaurin, Steve Buccellato, Tom Daning, Marie Javins and Tom Brevoort.

For this website, a hearty "thank you" goes to Thomas Miller for drafting many of the Mission Summaries. Thomas' summaries were part of his old fan site and now appear on Tony Moller's  Alien Legion fan site.

Legion (aka Army) – 50,000 + legionnaires. Typically commanded by a Lieutenant General or higher. Combines two or more Corps. An Army Group is composed of two or more field armies.

Corps – 20,000 to 45,000 legionnaires. Two to five Divisions constitute a Corps, typically commanded by a Lieutenant General. The Corps provides the framework for star system operations.

Division – 10,000 to 15,000 legionnaires consisting of three Brigade-sized elements commanded by a Major General.  Performs major tactical operations for the Corps and can conduct sustained battles.

Brigade (aka Regiment) – 3,000 to 5,000 legionnaires. A Brigade HQ commands the tactical operation of two to five Squadrons. Commanded by a Colonel and employed on semi-independent operations.

Squadron (aka Battalion) – 300 to 1,000 legionnaires. Four to six companies make up a Squadron (not to be confused with “Squad”) and are commanded by a Lieutenant Colonel.

Company – 62 to 190 legionnaires. Three to five Platoons form a Company, which is commanded by a Captain. An artillery unit of equivalent size is called a Battery while an armored unit is called a Troop.

Platoon – 16 to 44 legionnaires. Led by a Lieutenant and usually consists of two to four Squads of 9 to 10 legionnaires.